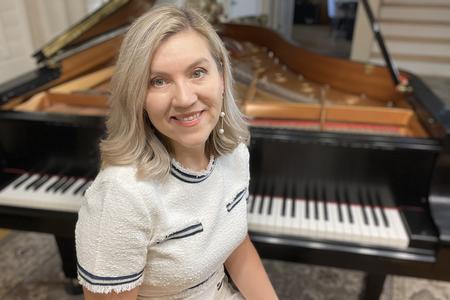 A Native Russian, Natalya Thran, received her formal music education in the former Soviet Union. She earned her Master’s degree in Music with Honors from Tashkent State Conservatory and her Master’s in Arts from the University of Nevada, Reno.  Natalya came to the USA after winning a competition in the former USSR. The prize of the competition was a scholarship to study in the USA. Natalya Thran has studied with Isabella Manulkina, Tatyana Levina, Dr. Ron Williams, Dr. James Winn, and Walter Cosand.

Natalya Thran is a Nationally Certified Teacher of Music by MTNA and served as the  President of the Arizona State Music Teachers Association in 2015-2017 and  MTNA   Southwest Division Director and Chair of MTNA Collegiate Chapters in 2020-2022.

Natalya Thran is an experienced independent piano teacher of all ages and levels of students. Her students have won numerous local, state, national and international piano competitions and festivals.  She is a frequent adjudicator and clinician in Nevada and Arizona.

Her piano duet students represented the state of Arizona in the MTNA Southwest Division Competitions in 2012-2013 (Portia and Lydia Letham), and in 2017-2018 (Toya Liu and Ivan Yang).  In 2019-2020 and 2020-2021,  her student Brayden Wagner was the MTNA  Arizona Junior Composition competition winner and second place winner in the Southwest division round.

Currently, she resides with her family in Gilbert, Arizona.